“Be kind to one another, tenderhearted, forgiving one another, as God in Christ forgave you” (Ephesians 4:32, ESV).

Andy lived in a small farming community in Idaho. When he was fifteen, he took a gun to school. He showed it off to his friends, who crowded around him at the lunch table.

But while he was handling the gun, Andy accidentally discharged the weapon. Another student, seventeen-year-old Larry, got shot. Paramedics were called, and they took Larry to a local hospital.

After several days, Larry woke up to hear he was paralyzed. Overnight, his baseball scholarships disappeared, and his girlfriend dumped him. But he couldn’t stop thinking about Andy.

“I know most people would think I hated him. But I didn’t. All I could think about was my younger brother. He’s done some dumb stuff and I couldn’t imagine how he’d feel if he seriously hurt somebody.”

When Andy went to trial, Larry was there. He testified on the other boy’s behalf and begged the jury to show mercy. “He’s already changed my life forever…. he knows that, and I know it. I don’t want his life to be messed up, too.” Larry explained.

Because of Larry’s compassion, they sentenced Andy to only a year in a juvenile detention center. After that, he’ll be on probation for a few years.

God, when someone else’s decisions affect my life, let me be forgiving and gracious. Not because of me, but because of Jesus and the forgiveness He’s granted me. In Jesus’ name, Amen.

Hi, I’m Katherine and I’m glad you’re here! My mission is to show people they can come back to God, no matter what they have done. I believe God is always waiting for us with open arms, and I want to share that message with the you. Read More… 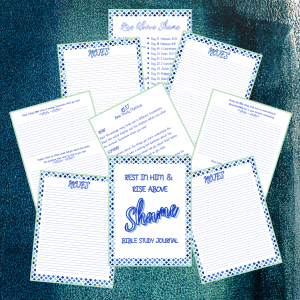 GET ACCESS TO THE LIBRARY NOW! FREE Printables add

“The aim of our charge is love that issues from

“All Scripture is breathed out by God and profit

“But I say, walk by the Spirit, and you will not

Revised color pages for Rest in Him & Rise Above S

Reading plan used in Journal. Get your copy now! k

Use the REST Bible Study Method and color pages to

Use the REST Bible Study Method to journal your wa

Free printable for members of A Place of Humility.

Looking for a Bible study journal that will help y

Let go of all your negativity and get lost in the